The river was running fast again when we returned from Spain, and after a couple of days when the level had reduced slightly, we set off on our boat journey, encountering our first French lock within the first 15 minutes.  We had walked up to make the acquaintance of the lock-keeper a couple of evenings before and when he saw the registration number of our car he told us that he had a Spanish grandfather, and spent all his holidays on the Costa Brava.

The first lock went without incident, though for some reason I stayed up on the lockside, in the pouring rain, whilst holding the rope, failing to notice that indeed the “hoop” through which I had secured it was in fact a runner bar running all the way down the lock wall.  So I could have stayed on the boat and held the boat steady from within the wheelhouse.  But still, you live and learn.  And what we also learned was that no two locks are the same!

Within a short space of time we had encountered straight sided locks with runner bars, straight sided locks without and locks with sloping sides that had a floating pontoon  (usually just a tiny thing and certainly not enough to accommodate all the boats that might be in the lock).  Presumably the second boat into the lock hitches onto the first who has secured to the pontoon, and any others hitch onto the second and so on.  Fine locking downstream, but one wonders how stable it is going upstream.

On some of the sloping side locks it’s possible for a long legged person (which certainly isn’t me!) to step out onto the lock side to wrap the rope round the bollard, but on others the slope seems to be less steep and hence the side is further away.  Here you are relying on the good nature of the lock keeper to hang around long enough take your rope and hand it back to you.  Otherwise, you have to resort to the bits you were taught in training, i.e. the bits you never really mastered and now wished you had…… trying to lasso the bollard.  In time I managed to master this, but those first few days I came to the conclusion that I am far too short for this, as I failed to both capture and release the rope with this manoeuvre, not being able to describe a big enough circle with my arm.  Neville has helpfully said he will attach some brass stepping plates to the back of the rear cabin so that I can climb up on the roof to get the height I need!

We learned that despite all our training on radio procedures etc,  the lock-keepers do not use the jargon.  The radio seems to be used simply as a routine telephone.  Contact seems to be established by simply calling out the name of the next lock twice, to which the response “j’ecoute” can be heard.  Then we simply said “nous sommes plaisance, et nous voudrons descender l’ecluse”.  None of this “Dutch barge Desormais calling Cromwell Lock, over” business.  And when you’ve finished you simply say “OK” or “d’accord”.  Or at least that’s the way we found it when we had to call the lock on the Seine., No doubt like the locks, the protocol will differ with our location. 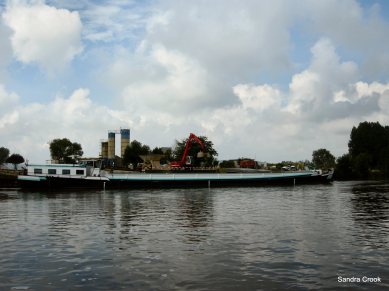 We cruised down the Yonne, occasionally sharing a lock with a couple of great peniches or barges, see photo, (which was quite unnerving), stopping at Villeneuve, Sens and Montereau  on the first three nights.  The Yonne is described as a wide and majestic river, prone to flooding during the spring months, but not a problem whilst we were navigating it, despite some very heavy rain after our arrival.  Each town was set on both sides of the river, with impressive bridges and very good tree-lined moorings right in the centre.  At Villeneuve we were moored right outside a picturesque hospice, which had a sign outside asking for “quiet” for the residents.  So we did have a lovely peaceful night.

At Sens we met two couples, one couple in a plastic cruiser, the other in a 54ft narrow boat.  One couple were moving on but we had a good chat with them, and in the evening drinks with the couple from the cruiser.  They also invited an American guy, quite old salty type of mariner, who was a writer, had an unusual habit of talking with his eyes closed, and was devastated because he had just lost his cat, a white female with a black tip to her tail and called “Dipstick”.  He was quite a character, but strangely, for a writer, he didn’t seem to have much interest in other people, preferring to launch into an anecdotal, almost pre-rehearsed dialogue.  But we both felt very sorry for him.  He lived alone in his boat and the only way he could move it from one place to the next was when members of his family visited him so that they could crew for him.  It rained heavily on the night before we left, and we hoped that this might persuade the cat (if it had simply gone off on a spring-time jolly) to return home.  However, the mooring was quite close to a busy road, and we feared the worst for him.

Our stay at Montereu was brief, but enjoyable.  This is the site of the confluence of the Seine and the Yonne, and we moored up outside a picturesque building with painted murals depicting the reconstruction of the local chateau.  Across the river was a beautiful and very unusual church, which was floodlit at night.  We were moored on a floating pontoon, and the next morning (Sunday) got the shock of our life when the lock a couple of kilometres downstream on the Seine jumped into action and discharged five enormous boats, one of them looking very much like sea going craft.  The effect of the wash of these monsters, of which one turned down along past our boat to go up the Yonne, and the other four going straight on up the Seine, caused our boat to rock so violently that it snapped the rope on one of our fenders and it followed the boat up the Yonne.  The tiny plastic craft behind us was bucking like a crazy horse, and I hope the people were up, or I think they might have been pitched out of their beds.

We had moored next but one to the couple we had met at Sens, so we talked to them for a while before wandering into the town to buy our staple diet….French bread and wine.  Another couple came along (all British by the way) and they were really interesting and had some great tales to tell.  They had a small narrowboat, and had brought it across to Holland by lorry.  But by some misunderstanding of the language (they must have been using a foreign haulier) the boat was launched into the sea instead of into the canal.  So they had to negotiate the docks at Antwerp in a tiny narrowboat, surrounded by gigantic steamers and tankers.  A great start to their adventure, so great that the guy said his wife nearly made him turn round and go home.

What struck me about all these people was how relaxed they all were, and what interesting people they were too.

So mid morning we set off down the Seine, pre-warned that traffic was dense on this stretch of the river.  As it happened we met nothing, and enjoyed a pleasant and leisurely cruise down to St Mammes where we turned left and waited for our first canal type lock to empty, to take us up on to the Canal du Loing to our overnight stop at Moret sur Loign.  The lock was operated by a lock-keeper, whose responsibility extended to opening and closing the gates, and opening and closing the paddles.  Nothing more than that.  So I had to do my first climb out of the lock using the slimy ladder provided for the purpose so that I could take the ropes.  Good to be back on familiar territory!  NOT!

I used to cruise the French waterways with my husband four or five months a year, and wrote fiction and poetry. Now I live on the beautiful Dorset coast, enjoying the luxury of being able to have a cat, cultivating an extensive garden and getting involved in the community. I still write fiction, but only when the spirit moves me - which isn't as often as before. I love animals, F1 motor racing, French bread and my husband, though not necessarily in that order.
View all posts by Sandra →
This entry was posted in Cruising in France and tagged cruising in France, Sens, sloping side locks, Villeneuve. Bookmark the permalink.

5 Responses to Canal du Loing, via the Yonne and Seine, May 2008