Thursday 5th June we set off from Cepoy, with the dutch couple in their yacht at 9.00am.  Within the first few minutes we entered the Canal du Briare.  We did eleven locks during the course of the day, several of which were automatic locks.  Many were quite deep, and 3 metres plus is about my limit for climbing out of the lock via the ladders, particularly when they are green and slimy. 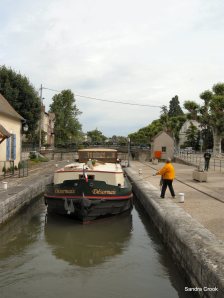 The lock in Montargis attracted some attention from a coach-load of tourists, and on the way out of Montargis we negotiated probably the deepest lock we have encountered so far.  I walked up to it, but could have stayed on board as the very pleasant lockie would have offered a hook for tying the rope to.

At the four consecutive automated locks I had a lot of work to do on the quayside, taking the ropes and helping to secure the yacht behind as well as ours, and eventually the lockie came back from his lunch, speaking English and apologising for not being there.  He helped us through the last two.  After a long cruise, we then arrived at Montbuoy (pronounced Montbwee) where the drizzly rain that had started around lunchtime, suddenly turned into a steady downpour.  We moored up by a school, in sight of the next (deep) lock, and with lightweight pleasure craft on either side.  The dutch couple also moored up here.  We were both absolutely exhausted and did no jobs, just computers, downloading photos and napping.

In the evening, after our meal, we took a little walk around Montbuoy and looked at the lock (quite deep).  Saw a magnificent hotel peniche, no expense spared and absolutely immaculate, Jacuzzi on front deck, verandah, lounge, dining room etc etc.  The way some people live!

Friday 6th June.  We listened to the rain pattering on the roof all night, and it was still raining heavily by the time we should have been setting off.  I went up to the lockie to explain we wouldn’t be going.  First sign of the type of French rudeness we had been led to expect, when I said “parlez vous Anglais?” to which the lockie’s young supervisor said arrogantly, “non – parlez vous francais?”.  So I said what I had to say in French (stuff you pal!) and got my point across.  The old lockie looked embarrassed.

We left after lunch, when there was something of a break in the skies, and did five locks and 11 kilometres.  These were the first deep locks where I stayed on board and looped my rope over the hook lowered to us by the lockie.  It worked out quite well, and was nowhere near as bad as I had feared.

All the lockies offered the hook today, which had not been the case earlier.  Maybe no more lock ladders???  We had to wait half an hour for the lockie to appear at Chatillon Coligny, but otherwise OK.  Some of these lock-keepers are responsible for several locks, and this one was racing up and down on his motor bike along the towpath, tending to boats going through at different stages along the stretch.  Moored in front of the lock starting the climb to Rogny. 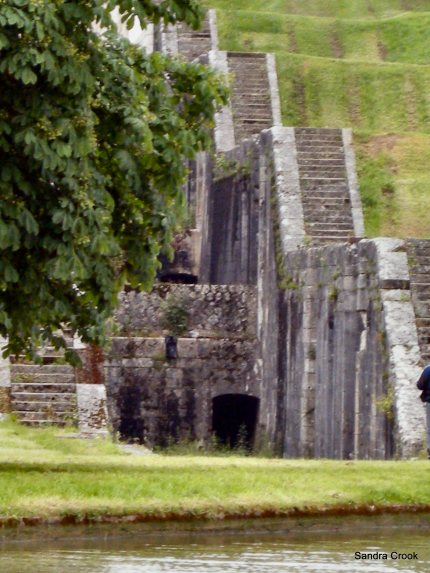 Saturday 7th June:  The day was overcast but the rain held off until early afternoon.  We set off at 9,00 am and completed the three locks before cruising into Rogny to start the chain of six ascending locks to the watershed.

A really nice lock-keeper attended to us, well two really, Charles Aznavour (type) at the first two and then a guy racing around with a cheery fresh face who kept disappearing to tend to the boaters ahead and then racing back to us.

Once we cruised into a lock and there was no sign of him.  Water was leaking heavily through the lock gate ahead of us, and I began to get a bit anxious with all the noise and echo as we waited.  Then suddenly his cheery face popped over the edge of the lock  above us, and we were underway again. 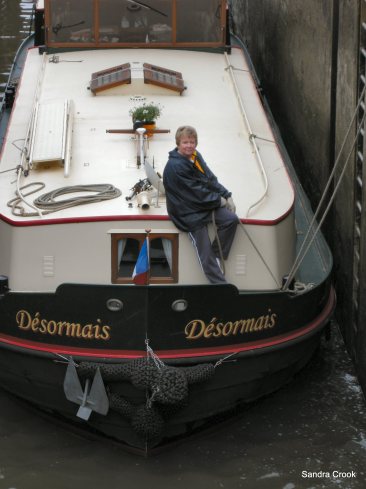 We moored up on the watershed (the stretch of water at the highest point of the canal) just before the start of the descending locks and commencing at 1.00pm prompt, when the lockie opened the top lock, we descended the flight without assistance from the lock-keepers. Descending is much easier, but not as interesting.

Again another five locks here, plus one at the bottom in Ouzouer.  The problem of not being able to lasso bollards showed itself again here.  It would be so convenient to be able to stand on the boat and lasso, instead of climbing off, taking it back on board (where you are so high that it frequently pulls off the tiny lip of the bollard and you have to do it all again.)  Also when the lock has emptied you have to retrieve your rope by pulling it all the way through, quite onerous with the long front and back ropes, whereas with a bit more skill I could at least stand on the roof of the boat to jerk it off the bollard

At the bottom lock the lockie told us that when we were ready to leave in the morning we need to press the button on the communication system box outside the lockie’s hut, to alert the lock-keeper at the next lock. 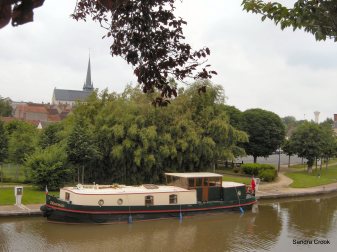 We met a nice couple at Ouzouer, they had the yacht in front of us (Hurkur – a Liverpudlian hairdresser perhaps!) and they helped with the ropes while Neville was busy stuffing it up, as you always do when someone is watching

We had a walk round the sleepy village, did a bit of shopping at the local shop and peered in at the butchers.  Ouzouer is a nice halt, free electricity and water, a shower block nearby.   This is also a halt for camper vans.

Then the heavens opened, and we went below to eat whilst watching the Canadian GP qualifying rounds.  Hamilton on pole, Jensen starting from the pit lane.

Sunday 8th June:  Couldn’t believe it, after a week of intermittent downpours and grey skies, we woke up to a clear blue sky (not previously forecast until Monday).  What a difference it makes to getting up.  Strolled up to the boulangerie, which was already partly sold out at 8.00am and onto the second bake-batch I guess.

We will probably leave the Canal du Briare today and enter the  Canal Lateral a la Loire, where there should be longer stretches in between locks. Here on the Briare, we have had a lock practically every 15 minutes or so.  Although I am not doing the paddle gear winding and gate pushing the way we did on the canals in England,  (although I do help the lockie with one of the gates usually) it’s amazing how tiring it can be simply coiling both ropes at the end of each locking and hanging on to them during the lock filling.  When you are locking down, it’s not so tiring, but then you have to do the lasso-work.

At the final lock on the Canal du Briare I managed to both lasso the bollard as we came into the lock, and jerk it off by standing on the roof of the boat at the bottom of the lock.  Hooray!

We passed through Briare (not much to see from the canal) and went across a huge aqueduct spanning the Loire.  Neville managed to bang the side while taking in the view, and yet another small fender was lost.  We shall have to buy a job lot at this rate.  The canal became a bit bland after this, just trees and fields on either side, and I did some work on the French language as we cruised. 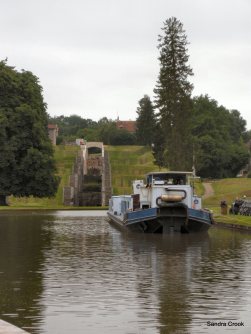 We passed another boat coming from the opposite direction – Wendoline – which was built up at the Sagar boat yard where we bought our boat.  It was identical from the outside (different paint job.  We exchanged a few jokes as we passed each other….”great boat”  “good taste” etc, and they said that they had nearly bought our boat because they were fed up with waiting for their own to be finished.

We paused for lunch at Beaulieu sur Loire, and it was such a nice place (with all services free) that we decided to stay overnight.  Our yachting friends stopped for lunch but went straight off as soon as the lockie at the next lock returned from his lunch.  (Everything stops for the lockie’s lunch-break – I’ve even heard that they have left people stuck in the bottom of a lock waiting to lock up!)

I used to cruise the French waterways with my husband four or five months a year, and wrote fiction and poetry. Now I live on the beautiful Dorset coast, enjoying the luxury of being able to have a cat, cultivating an extensive garden and getting involved in the community. I still write fiction, but only when the spirit moves me - which isn't as often as before. I love animals, F1 motor racing, French bread and my husband, though not necessarily in that order.
View all posts by Sandra →
This entry was posted in Cruising in France and tagged Canal du Briare, Ecluses de Rogny, lassooing bollards, Montargis, Ouzouer. Bookmark the permalink.