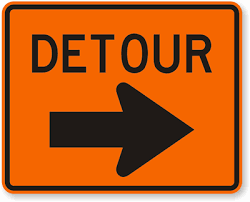 This week’s one word prompt from Lillie McFerrin’s Five Sentence Fiction Challenge was:

Summoning every last ounce of her energy, she crawled painfully towards her car, half blinded by blood streaming from her forehead.

She had no idea where he’d gone, but sensed that if she didn’t take immediate advantage of his absence she would not survive this night.

Hauling herself into the driving seat with difficulty, she reached for the ignition keys, praying that wherever he was, he wouldn’t hear the engine springing into life.

A clawlike hand seized her wrist, gripping with such strength that her fingers opened, stiffened, paralyzed, whilst another hand of steel gripped her throat, squeezing… crushing… until welcome darkness claimed her.

Later that night, twenty miles further down the road, the same hands reached out of the shadows to position a black and orange road sign in the middle of the quiet country lane; the killing-fest was underway.

I used to cruise the French waterways with my husband four or five months a year, and wrote fiction and poetry. Now I live on the beautiful Dorset coast, enjoying the luxury of being able to have a cat, cultivating an extensive garden and getting involved in the community. I still write fiction, but only when the spirit moves me - which isn't as often as before. I love animals, F1 motor racing, French bread and my husband, though not necessarily in that order.
View all posts by Sandra →
This entry was posted in By the Way ..., Just Sayin' and tagged abduction, five sentence fiction, highway, murder. Bookmark the permalink.