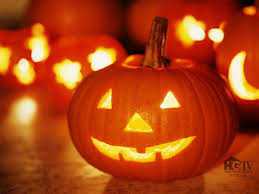 Well it’s started, the first gang of ‘trick or treaters’ has just left and I’ve already lost my temper.

Not waiting for me to answer their first ring on the bell, they commenced hammering on the door, and pressing sticky lips to the stained glass window, before returning their attentions to the assault on the doorbell. As I went to get the basket of treats from the kitchen, there was no let-up in response to the deafening, “Oy” that I let slip, as the door creaked under their onslaught.

One of the drawbacks of living on a fairly large residential estate is that on occasions like Hallowe’en, the supply of kids beating a path to you door can be practically endless. And tonight promises to be no exception to past years, although now I do feel that I’ve learned from my mistakes.

This year I’ve kept the range of available treats to a minimum, which is always advisable unless you want to spend hours shivering on your doorstep whilst half a dozen little darlings ‘hum and har’ about which particular chocolates or toffees are their favourites.

Out of consideration for the parents, I’ve also tried to make sure I buy only individually wrapped/sealed treats, but then that’s probably the fastidious (and over-imaginative) side of my nature coming out.

The other thing I’ve learned is to make sure I’ve checked whether the parents are hovering in close proximity before offering my response to the plaintive wail of “I don’t like those”. As a general rule, parents are not impressed by “tough s**t, hon” or “you’ll get what you’re given.”

If you put your ‘treats’ into an open container, as I do, make sure you are the one doling them out. Don’t extend the container to allow them to help themselves. Apart from the inevitable sorting through to find something they like, there’s no accounting for the kid with hands like shovels, or the ones who use both hands, or the ones who come back for a second handful when they think you’re not looking.

Make sure how many buckets or baskets are going to be offered up to you. Last year I dropped half a dozen sweets into someone’s little red bucket, only to have the other five pull their little red buckets from behind their backs afterwards.

Whatever you do, it’s wise not to express the opinion that the fifteen or sixteen year old trick or treater is a bit old for this lark. Not unless you’ve put your car safely away in your garage anyway.

And don’t make the mistake of giving money… you’ll be amazed how quickly the word gets round. And in any case, whatever you judge to be the right amount is sure to fall short of their expectations. Don’t be offended if they bite the coins to check whether they’re genuine; kids today are much more worldly-wise than we were. (I’m assuming, however, you won’t be giving them the opportunity of holding any notes to the light so they can check for forgeries.)

Resist the temptation to don a frightening mask yourself and leap out of your own front door. There’s always the risk of this degenerating into something a bit more physical than simply handing over treats. It is however, quite permissible to pull a dreadful grimace, with your face pressed to your side of the window. After all, it’s your house.

Don’t expect kids to understand the concept of ‘having your meal in peace’. When you’re ready to eat, or you’ve simply had enough of the annoying little b*****s, turn off outside lights, close doors and keep internal lighting to a minimum. And be determined… even if they take it out on your front door for five or ten minutes… stick it out. Turn up the television if necessary.

And last but not least, pray for wind and rain… it won’t stop them coming but it will make sure they knock it off reasonably early.

I used to cruise the French waterways with my husband four or five months a year, and wrote fiction and poetry. Now I live on the beautiful Dorset coast, enjoying the luxury of being able to have a cat, cultivating an extensive garden and getting involved in the community. I still write fiction, but only when the spirit moves me - which isn't as often as before. I love animals, F1 motor racing, French bread and my husband, though not necessarily in that order.
View all posts by Sandra →
This entry was posted in By the Way ..., Just Sayin', Published Work and tagged Hallowe'en. Bookmark the permalink.