Words on the Water 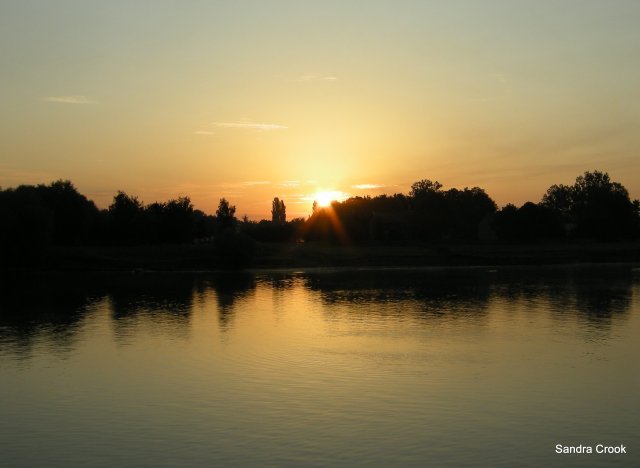 Words on the Water

During recent weeks we’ve been cruising on the French waterways.  I made a hurried trip to the library before we left, safe in the knowledge that although the books are available only on three week loan periods, it’s possible to renew them via the internet.  To be honest, I made some careless selections, not examining them closely enough beforehand, and at least three were abandoned half way through.

Nothing lost though, because boaters do tend to be fairly avid readers, and there is an informal book-swap arrangement along the towpath and river banks.  Sometimes it works, other times it doesn’t and you give up three or four really good books in exchange for three or four bodice-rippers.  That’s just the luck of the draw.  Many of the ports do have book-swap shelves in the capitaine’s office, and it’s possible to pick up some interesting books from there.  But the principle advantage is that with a limited range available on the boat, and plenty of time on your hands, you do find yourself reading a few books that you might not choose for yourself, occasionally with gratifying results.

I’ve read two by this author before, or rather I read one (The Island) and abandoned the other (The Return), partway through.  Hislop always researches her subjects well and this one is no exception, detailing the events that took place in Thessaloniki from 1917 to 2007.  The changes which took place in Greece over this period, and the way they affected people of different religions and political affiliations and beliefs are detailed in vivid imagery.  Beautifully written.

I read one by this author last month and found it a surprisingly good read.  This one rather less so.  A young woman finds herself in the glare of publicity after dramatically saving the life of a child on the streets of New York.  Recognised by a man claiming to be her real father, their meeting sets off a chain of events which dismantles all that she has held dear since childhood.   I wondered whether this one had been written considerably earlier than the one I read last month, because the writing seems to be slightly raw in places.

This is a lengthy book, almost 600 pages which is written in a very readable style which is as well, because I doubt I would have stuck with it otherwise  The Washington Post describe Powers as ‘one of the most original and innovative writers of fantasy’, and they do not overstate the case.

The story revolves around the romantic poets, Byron, Shelley (and to some extent Keats) and rewrites history, deeply immersed in fantasy.  It’s written from the point of view of a bridegroom whose wife is slaughtered on their wedding night by a vampire who sees herself as his rightful bride, all because of some drunken foolery on the eve of his wedding.  The vampiric spirit then pursues him abroad as his career lies in ruins and he is forced to assume a false identity.

I feel slightly uncomfortable about historical fiction based on reality; it seems such an incredible liberty to take with someone’s life.  And particularly since this one has some very well known figures of the romantic period indulging in or being enslaved by vampiric possession.  Throw in a handful of trolls, incubi, succubi and move the story from England to France to Italy… well you get the idea.  I thought it went on a bit too long, though it is crammed full of action.  Would I read another one of his?  Hmmm, the jury’s still out I think.

Anita Shreeve is one of my favourite authors, and the breadth covered by her books is quite simply amazing.  This one, set in New England around the turn of the century recounts an extraordinary and long-lasting love affair between a young, very young woman (fifteen years old) and a man some twenty five years her senior.  In her foreword Shreeve says that this is the longest of her novels, in some cases nearly double the length of others, and it is a satisfying and compulsive read.  Her main character, Olympia Biddeford is an intelligent, highly educated and mature young girl on the brink of womanhood when she meets the man who is to become the love of her life and the father of her only child.  The author’s characterisation of this articulate, reasoned and self-possessed young woman is second-to-none.  I felt as though I knew her, by the end of the book, and throughout I was totally convinced of Olympia’s ability to survive the turn that her life took as a result of her compulsive and steadfast love for a friend of the family.

It’s an entertaining and compulsive read.

This is a story written from the POV of a fourteen year old girl, June, who has recently lost a much-loved uncle (Finn) to AIDS.  It’s a tender story of a young girl dealing with her insecurities and other people’s prejudices in the best way she can, whilst at the same coming to terms with the concept of forgiveness and compassion.  June’s involvement with her uncle has destroyed a previously close relationship with her elder sister Greta, and as she negotiates her way round Greta’s subsequent cruelty, and her mother’s prejudices over her uncle’s lover (Toby) whilst at the same time learning (from Toby) about herself and her uncle, she comes to realise that all has not been as she had imagined.

A complex tale throughout which the ‘unreliable narrator’ POV holds a great deal of conviction and charm.  Enjoyed this.

Carol Rifka Brunt received a generous Arts Council grant to tell this tale, which is her first novel.  It was money well spent, and she’s on my list for the future.

Clare Morrall:  The Language of Others ****

This novel is written in flashback, quite unusually to three different periods in the main character’s life.  The book starts with Jess’s estranged husband asking her if they can try again with their marriage, and the plot builds and tracks back from there.  We visit Jess’s childhood at the run-down stately home, Audlands, bought by her parents.  We see that Jess is a detached child, totally isolated from people, wrapped up in her own world of music.  Later we visit her marriage to Andrew, a talented musician yet a strange off-beat individual with a sinister side to his character, and who seems as unequal to the challenges of life now as Jess did in her childhood.  Their only child seems to be as equally detached as Jess was, but later makes an astounding success of his abilities.

It’s a good read, a deceptively simple plot that is cleverly constructed to pull you in, involving you with all the characters.

For me, the reviews of this book rather surpassed the content.  A father spends a lot of time soul searching after his son assassinates a potential presidential candidate.  Despite the fact that the son pleads guilty, and is sentenced to death, the father continues to search for evidence that his son is at best innocent, or at worst has been set up or subject to undue influence.  When he isn’t chasing red herrings, the father agonises about his past, the broken marriage that produced this errant son, the mistakes he’s made that have led to this tragic event.

The problem is that the son, though likeable,  is clearly not very well-adjusted.  Phrases like autistic, or Asperger’s syndrome spring to mind to justify his odd behaviour around other people.  The motivation for the crime seems to be that the son admired the politician, and then, on the strength of a ‘crowd handshaking event’ where the politician ogled the son’s newly acquired girlfriend, he becomes disillusioned with him (and with said girlfriend too).  So whilst the reader hopes that there will be a feel-good outcome to the travails of the father, there isn’t really very much conviction that this is going to happen given the personality of the son.

Throughout the book the author dwells on the histories and demises of other killers, and it’s true to say that the book has been painstakingly researched.  But for me, it didn’t work.  And if I thought too long about the mind-set of the young assassin, I found myself becoming increasingly depressed.  The concept that there might be other young men wandering around contemplating actions simply because “it seems right” was an uneasy thought.

So it’s back to the UK now, and as autumn approaches, time to settle down in a comfortable armchair in front of a glowing fire, with a pile of books and a glass of wine by my side.  And that’s only in the mornings…   😉

I used to cruise the French waterways with my husband four or five months a year, and wrote fiction and poetry. Now I live on the beautiful Dorset coast, enjoying the luxury of being able to have a cat, cultivating an extensive garden and getting involved in the community. I still write fiction, but only when the spirit moves me - which isn't as often as before. I love animals, F1 motor racing, French bread and my husband, though not necessarily in that order.
View all posts by Sandra →
This entry was posted in Book Reviews and tagged Anita Shreeve - Fortune's Rocks, Carol Rifka Brunt - Tell the Wolves I'm Home, Clare Morrall - The Language of Others, Lisa Unger - Beautiful Lies, Noah Hawley - The Good Father, Tim Powers - The Stress of Her Regard, Victoria Hislop - The Thread. Bookmark the permalink.

2 Responses to Words on the Water