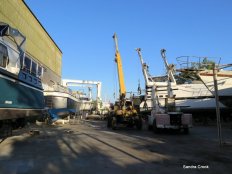 It’s 29 deg C, not a cloud in the sky and would be unbearable were it not for a slight sea breeze, stirring up the dust on the messy boat-yard floor, sending columns of iron filings skittering here and there.

There’s been relative peace for an hour, as boat-owners have retreated to the comparative shade of their half-finished, half-pressure washed, half-painted vessels for a brief bite to eat.

Shortly after 2.00 pm the first drill starts up, followed by a grinder and then a sanding machine. Tentative tapping converts into more confident rhythmic banging, and down the yard one of the crane engines roars into life.

From beneath our boat I peer over the top of my mask, keeping an eye on the approaching crane as I continue working the epoxy into the hull. The crane sidles perilously close to our stern, but Henri knows what he’s doing. Exhaust fumes permeate the sharp astringent odour of the resin. 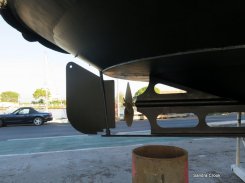 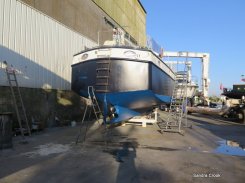 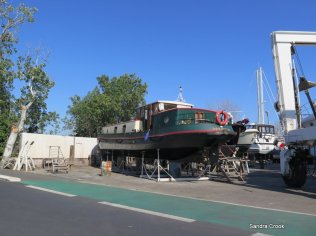 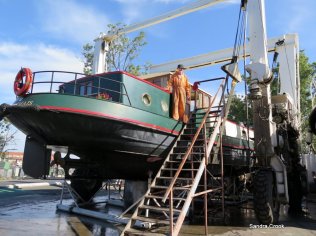 A contractor’s vehicle passes through the yard and parks up at the back, raising dust-devils as it passes.

And then it starts.

Rising above the grinding, squealing, whining and hammering, a pounding rhythmic driving beat soars out, loud enough to wake the dead from here to Marseilles, before wailing guitars and screeching voices add to the score. A male voice joins intermittently in the cacophony; there barely seems to be a discernible tune there, but whatever it is the singer is familiar with it and hits all the right notes in all the right sequence.

WTF!!! I scramble from beneath the hull and storm down the yard towards the source of the abomination; the contractor’s vehicle stands there, every door wide open, the hatchback high in the air as the radio belts out at top volume. I contemplate entering the car and trying to locate the volume control, but I chicken out. If caught, there’s no way I can explain myself in French. And what if I press the wrong control?

Seething, I return to our boat and try to get as far away from the noise as I can. The pounding and wailing continues, but I’m aware that the grinding and squealing and hammering have stopped.

I hear raised voices. Two or three of those working on their boats have obviously had enough. A lot of shouting continues, arms are waved in exasperation – how is it possible to conduct an argument with that volume of sound around, I wonder? And then the music stops.

I see the man who must be the contractor shrugging his shoulders, shaking his head angrily but he’s turned off his car radio.

The tranquility of the boatyard is restored. People resume hammering, grinding, drilling and sanding. The high-pressure washer hisses contentedly.

We’re peacefully at one with our boats again.

The boarder has been repelled.

I used to cruise the French waterways with my husband four or five months a year, and wrote fiction and poetry. Now I live on the beautiful Dorset coast, enjoying the luxury of being able to have a cat, cultivating an extensive garden and getting involved in the community. I still write fiction, but only when the spirit moves me - which isn't as often as before. I love animals, F1 motor racing, French bread and my husband, though not necessarily in that order.
View all posts by Sandra →
This entry was posted in Cruising in France and tagged Allemand, boatyard, bottom-blacking, dry-dock, Grau d'Agde, noise. Bookmark the permalink.

14 Responses to An Inappropriate Noise – September 2014