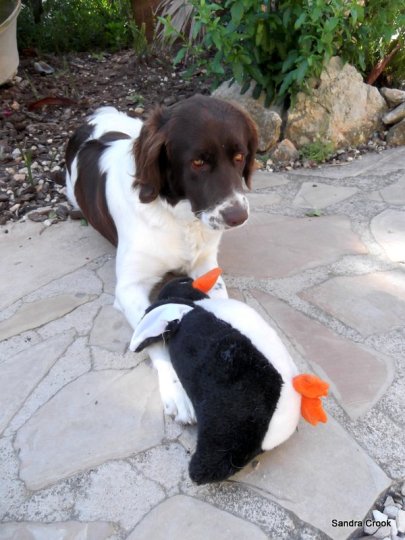 I included photos of my own pets in the Gone But Not Forgotten challenge on Friday, so here I’m including photos of other people’s pets.  The cat close-up is Luna; she lives on the boat moored next to ours at Pont de Vaux in France.  They say cats don’t like living afloat, but Luna is a very happy cat (as well as being beautiful).  The liver/white dog belonged to the owners of a spanish guest house where we stayed.  She was in the throes of a phantom pregnancy at the time, and her woolly penguin was never far from her side.  The other two animals spend a lot of time sleeping on the fishing gear at the spanish port of Javea, close to where we spend some time each winter.  The dog, I think, is waiting for his owner to return with his catch.  As, I suspect, is the cat.  🙂

I used to cruise the French waterways with my husband four or five months a year, and wrote fiction and poetry. Now I live on the beautiful Dorset coast, enjoying the luxury of being able to have a cat, cultivating an extensive garden and getting involved in the community. I still write fiction, but only when the spirit moves me - which isn't as often as before. I love animals, F1 motor racing, French bread and my husband, though not necessarily in that order.
View all posts by Sandra →
This entry was posted in Photography and tagged cats, dogs, Sunday Stills. Bookmark the permalink.