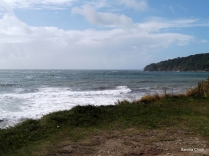 These images were taken right on the edge of Peveril Point, close to where we now live; the foaming ones show the tidal race that forms at the headland, whilst the lower one shows the lifeboat at anchor in the calmer waters of Swanage Bay, on the other side of the headland. 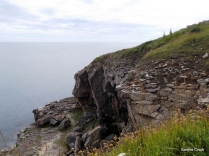 The Tilly Whim caves are located in this outcrop at Durleston Head, slightly further up the coast from Peveril Point…

whilst Durdle Door and Lulworth Cove are located a few miles further along the Dorset coast.

To see other photographs that have been taken “on the edge”, click on Weekly Photo Challenge.

I used to cruise the French waterways with my husband four or five months a year, and wrote fiction and poetry. Now I live on the beautiful Dorset coast, enjoying the luxury of being able to have a cat, cultivating an extensive garden and getting involved in the community. I still write fiction, but only when the spirit moves me - which isn't as often as before. I love animals, F1 motor racing, French bread and my husband, though not necessarily in that order.
View all posts by Sandra →
This entry was posted in Photography and tagged postaday, weekly photo challenge. Bookmark the permalink.

8 Responses to The Edge of Dorset: Weekly Photo Challenge