In October 2007, after a prolonged period of heavy rain, the dry-stone stream and river beds in the mountainous region of the northern Costa Blanca, Spain, began to fill rapidly.  Very shortly the streams and rivers were thundering down the mountain sides, sweeping up canes, stones and rubble along their path.   As the rubble reached the narrow stone bridges spanning the gullies, the through-flow became blocked, and the torrents then found their way around them, taking out a few dwellings for good measure as they raced towards the coast.  Eventually many of the bridges succumbed to the pressure of the detritus, leaving villages cut in two.

Eventually the torrents reached the coast, tearing through the port of Javea, snatching up small craft moored in the marina there.  Many boats were swept out into the sea, but as the port bridges became blocked with debris, others perished when they were slammed against the crumbling structures.

The scene in the town was upsetting. 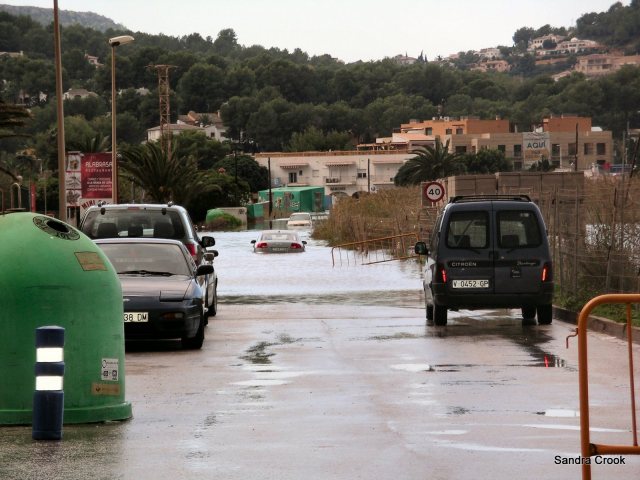 But the sight of so many boats and their contents strewn along the beach, much of it having been returned next morning by the tide, together with tons of seaweed… well that was awesome. 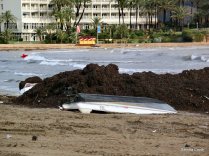 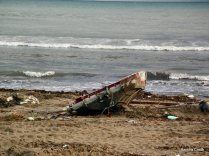 Some boat-owners fared better than others.

This boat, neatly deposited upside down on the harbour wall, was relatively unscathed.

And these two were craned to safety.

That was a truly chaotic November, even by Spanish standards.  But with the help of EEC funding, the bridges were rebuilt, and since then efforts have been made to keep the river beds free of the reeds and canes which were such a contributory factor to the amount of damage caused that month.

To see other ‘Chaos’, click on the link.  Weekly Photo Challenge

I used to cruise the French waterways with my husband four or five months a year, and wrote fiction and poetry. Now I live on the beautiful Dorset coast, enjoying the luxury of being able to have a cat, cultivating an extensive garden and getting involved in the community. I still write fiction, but only when the spirit moves me - which isn't as often as before. I love animals, F1 motor racing, French bread and my husband, though not necessarily in that order.
View all posts by Sandra →
This entry was posted in Photography. Bookmark the permalink.

13 Responses to Chaos on the Costa – Weekly Photo Challenge