Taking Leave of the French…

It’s nine glorious years since I first started posting trip reports about our cruising activities in France, and now, sadly, this log is coming to an end.  It’s fitting, I guess, that the last report should start in pretty much the same way as the first one, with a picture of Desormais being lifted out of the water, this time in Macon, Bourgogne Franche-Comte as opposed to Newark, Nottinghamshire.

The port at Macon. Note the depth of the shuttering – you’ll need to climb a ladder before lift-out! 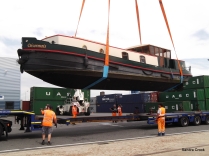 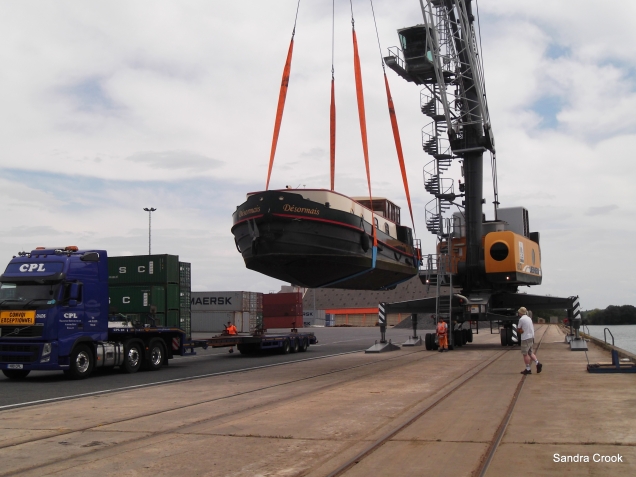 We used CPL, the same hauliers who brought us out to France

Macon is a commercial port, largely servicing container-carrying traffic, although it is a popular lift-out point for pre-sale boat surveys as well.  The crane is a monster, and its lifting capacity was never in question.  We understood the crane operator to tell the haulage company that the boat weighed approx 24 tons – we’d anticipated it was 26.

Once the boat was on the low-loader, Neville and I climbed up to dismantle the wheelhouse, a task we’d run through (in our minds only) several times, and it went fairly smoothly.  The upper sides of the wheelhouse (windows) hinge down against the lower sides, the front and back lie flat on the cabin roof, and three of the wheelhouse roof panels are lowered to fit across the top, protecting  the upholstery from the elements, with one panel and the upper half of the side doors being taken below.  That whole area was then tarped and roped by the hauliers.  It was a hectic afternoon, and took place in temperatures which soared into the mid thirties.

Three days later, and in thankfully coooler conditions, Desormais arrived at Redhill Marine, in the midlands where she was transferred onto a boat lift, lowered onto a trailer and transferred into the River Soar.

From there it was a short, leisurely journey around the corner onto the Trent and through at lock to her new permanent moorings.  We couldn’t help but marvel at the contrast between the Soar/Trent, and the vast expanses of the Saone and the Rhone that we’ve been used to for several years.  “They’re rivers, Neville, but not as we know them.”   🙂

Desormais is now resting at Sawley Marina, in the midlands where we hope to continue cruising for short periods and use her as a staging post for our trips to the north of England to visit family.  We’ll probably sell her sooner rather than later.

How it came about…

Sometimes you need to make changes in your life, and we decided about 18 months ago that we wanted to move to the Dorset coast.  Our last cruise was a short one, in September 2015 when we tackled the Saone heading north for the last time, calling at Gigny, Seurre, Auxonne, Pontailler and Gray.  The weather was mixed, with some glorious autumn sunshine punctuated by heavy deluges. 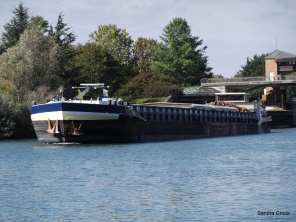 Gray moorings in a deluge

When we returned to Pont de Vaux, forging our way through a meadow of duckweed, we weren’t to know that this would be the last time we would return to our home port.

In May 2016,  having recently started advertising the boat for sale in a low-key way, we set off for our spring cruise as normal, but discovered that due to flooding we were unable to leave port due to the conditions on the river Saone, which was now level with lock which drops down onto it!

The Camp site at the Pont de Vaux lock

Saone level with the lock 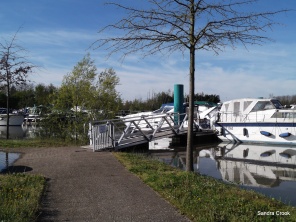 Note the gang plank goes UP to the pontoon!

Me, taking an early morning wade

Indeed, shortly after arriving we were unable to get to our car on the carpark at Pont de Vaux without wading through water, and soon it became impossible to get the car out of the car park due to flooding on the access roads.  So we did the usual routine maintenance, had a couple of interested parties looking at the boat, and then when water levels permitted, came home early to deal with our move to Dorset which was by then a reality.

In November 2016, we visited the boat to winterise her, our first trip from our new base, and discovered the journey was much more onerous than when we travelled from Peterborough.  It was time to have a rethink.  Aside from anything else, we also had significant commitments relating to our new lives in Dorset.  Maybe it was time to think about bringing her home.

And so, on June 26th, 2017 we left Pont de Vaux for the last time and spent our final night on the boat in French waters, moored just north of the St Laurent Bridge, Macon, as we have on several previous occasions,  and where I took my last photo of the illuminations.

We’ve had a brilliant time cruising in France, and it’s an experience we can heartily recommend. We feel very envious of those who are starting their own French idyll at this time or in the near future and we hope that you enjoy the experience as much as we have.

If we had any advice to offer it would be this:

I used to cruise the French waterways with my husband four or five months a year, and wrote fiction and poetry. Now I live on the beautiful Dorset coast, enjoying the luxury of being able to have a cat, cultivating an extensive garden and getting involved in the community. I still write fiction, but only when the spirit moves me - which isn't as often as before. I love animals, F1 motor racing, French bread and my husband, though not necessarily in that order.
View all posts by Sandra →
This entry was posted in Cruising in France and tagged Desormais, french cruising, Macon, transporting barges. Bookmark the permalink.