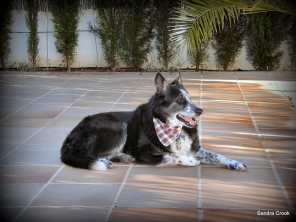 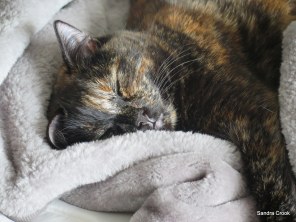 Cubby and Kelly were our two rescue border collies who came into our lives in 1995 when we lived in Johannesburg, South Africa.  When my husband was transferred to Germany in 1997, we flew them over with us and they lived happily in Bavaria for a couple of years, until he was transferred to the UK.  At that point they were then transported to England, and spent six months in quarantine before being returned to us for four happy years in Cambridgeshire.  In 2004  we were off again, this time by car to Valencia, Spain, where they lived out the rest of their lives until 2007.  Such a lovely pair, we both miss them.

Sophie Cat has been with us for just about a year, a rescue puss from the Animal Rescue Centre where I volunteer for a few hours a week, as part of the Cat Socialisation team – aka The Cat Cuddlers.  She’s quickly made herself at home and we wouldn’t be without her.

Animals play such a special part in our lives, and these three were truly beloved.

I expect we’re going to see a lot of babies, children and animals over at Weekly Photo Challenge this week.  🙂

I used to cruise the French waterways with my husband four or five months a year, and wrote fiction and poetry. Now I live on the beautiful Dorset coast, enjoying the luxury of being able to have a cat, cultivating an extensive garden and getting involved in the community. I still write fiction, but only when the spirit moves me - which isn't as often as before. I love animals, F1 motor racing, French bread and my husband, though not necessarily in that order.
View all posts by Sandra →
This entry was posted in Photography and tagged weekly photo challenge. Bookmark the permalink.