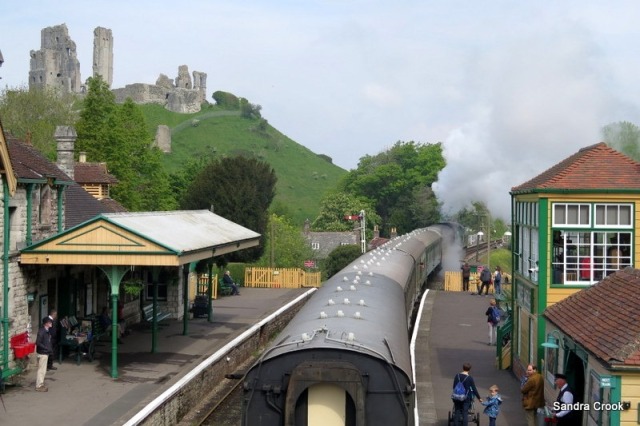 This small village accommodates even smaller minds, and the journeyman’s departure is no secret.  Everyone finds reasons to watch the locomotive steam away.

I ignore speculative glances, before curling myself around things they mustn’t know; the rapturous nights amongst the castle ruins, the empty promises, my equally empty purse…

and the child in my belly.

I quickly marry Caleb Brooks  – a man solid enough to withstand the rumour-mill, and one who’s long been asking.

We’re happy enough, Caleb and me.

But in a community where no-one has a future, a past like mine remains a secret source of joy.

The ruins of Corfe Castle tower above  picturesque Corfe station. There’s a wonderful photo opportunity to be had at dawn if you climb the neighbouring hill and capture the castle ruins rising out of the mists in the valley.  It’s the ‘dawn’ and ‘climb’ bits that put me off…  Thanks to Rochelle for allowing me to share the beautiful area in which we live, and for leading the merry band of Friday Fictioneers.