What Goes Around … (Friday Fictioneers, September 2012) 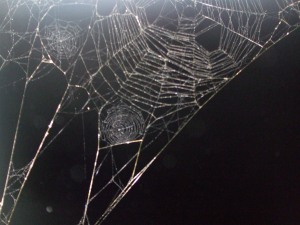 This week’s photo prompt on Madison Woods Friday Fictioneers came courtesy of Rochelle Wisoff-Fields.  (I’m on a limited and woefully intermittent internet connection this week, but will try to get to as many other submissions as possible.)

It was her own fault, he reflected, she’d a cruel streak in her.

Fair enough, I play with them, but I’ve never pulled the legs off them or flushed them down the toilet.  Now look what they’’ve done to her.

The silken cocoon in the corner stirred, and amidst the sticky skeins he glimpsed her wildly rolling blue eyes.

Felix leapt quietly from the sofa, and strolled towards the cat flap.

Shame, he thought regretfully, but probably time to move on now.

37 Responses to What Goes Around … (Friday Fictioneers, September 2012)