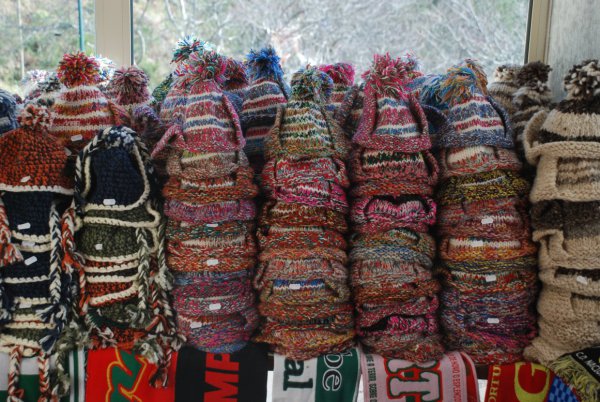 Reaching the end, neither will fathom why they ever began.

“Have a nice life,” he’ll murmur, with uncharacteristic civility, returning his door-keys.

“Don’t be a stranger,” she’ll say, hoping to God he will, and resolving to change the locks anyway.

Perhaps she’ll expect that crushing wave of ‘alone-ness’, no longer being, or having ‘a significant other’. When it doesn’t happen, she’ll realise they’ve each been on their way somewhere, just sharing the ride for a while.

She’ll see him again, years later, both married then.

They’ll smile, not stopping to talk.

They’ve been good to go… for far too long.

Christmassy hats (for that’s what I saw) reminded me that this is a season of the year for reviewing the past and contemplating the future.  So this piece reflects too many Christmasses during which both activities were studiously avoided.  The lovely Rochelle guides  Friday Fictioneers towards the end of 2017 with her characteristic aplomb.  Thank you, Rochelle.  It wouldn’t be the same without you.

I used to cruise the French waterways with my husband four or five months a year, and wrote fiction and poetry. Now I live on the beautiful Dorset coast, enjoying the luxury of being able to have a cat, cultivating an extensive garden and getting involved in the community. I still write fiction, but only when the spirit moves me - which isn't as often as before. I love animals, F1 motor racing, French bread and my husband, though not necessarily in that order.
View all posts by Sandra →
This entry was posted in Friday Fictioneers and tagged Christmas, Friday Fictioneers. Bookmark the permalink.